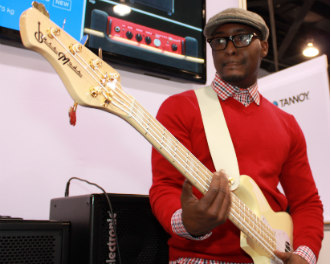 Walter Barnes Jr. is a musician extraordinaire.  He can be found producing, writing, singing, and performing on his bass with many celebrities and recording artists.  Currently, Walt is bassist with singers Toni Braxton and Babyface.  He recently performed on the 2012 American Music Awards with Christina Aguilera.   Walter has made cameo appearances on the reality show “The Braxton Family Values” on the WE station. Walt is not a stranger to television; he was one of the top three finalists in the 2009 season of MTV’s P.Diddy’s “Making His Band” television show.  Walter is completed his second album which is a gospel project with Walter Barnes, Jr. & Men of Ministry.    He has appeared on major television networks including NBC, ABC, The Word Network, TV-One, BET on the Bobby Jones Gospel Hour and The Gospel of Music with Jeff Majors.  Walter has played with national artists such as Wynton Maralis. He started his career in 1999 touring with Angela Bofill, Pieces of a Dream, Musiq Soulchild, Brian McKnight, Layla Hathaway, Anthony Hamilton, shared the stage with Earth Wind and Fire, Yellowjackets and Najee. Walter has toured the world and appeared on The Ellen DeGeneres Show, The Debórah Show, A&E, The Today Show and George Lopez Show.

Walter Barnes plans to continue producing and performing as he tours the world expressing God’s love through music.