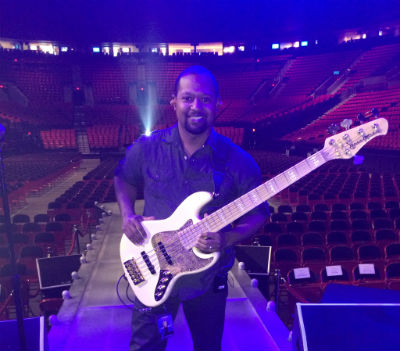 Nathaniel Kearney Jr. is a Christian man and dedicated bassist.
He believes in having a strong work ethic, perfecting his sound, and doing whatever’s needed for each situation and artist.

A native of Halifax, NC, a small town, he grew up listening to Gospel music.  Initially, he listened to mostly quartet groups…The Mighty Clouds Of Joy, The Gospel Keynotes, The Pilgrim Jubilees, The Williams Brothers, & The Canton Spirituals are some of his favorites.  At a young age, he developed a love for drums and began playing drums for churches and quartet groups in the area.  A few years later, he learned how to play bass.  Little did he know that skill would take him all over the world.

After honing his craft and deciding to pursue a career in music, Nate began playing for artists such as Karen Clark Sheard, Maurette Brown Clark, and Valerie Boyd when they performed close by.  In 2005, he got a phone call that would change his life.  He was called to play for Kurt Carr & The Kurt Carr singers during a Gospel event at the King’s Dominion theme park.  Kurt was so impressed with his playing that he asked Nate to play bass for the One Church Tour where he was the headlining artist.  Nate accepted and joined the house band for the tour allowing him to play for Smokie Norful, Vashawn Mitchell, James Fortune & FIYA, Rizen, and Vicki Yohe.  At the end of the tour, Kurt asked Nate to be the full time bassist for him.  As if things couldn’t get better, a few weeks later, Nate was asked by Smokie Norful to play for him for a performance on the CBS Saturday Morning Show.

From 2005 to 2009, Nate traveled all over the world with Kurt Carr.  He performed in England, Africa, Japan, Amsterdam, and Germany.  He was in the movie and played on the soundtrack of Sony Pictures film “First Sunday”.  Nate also had the opportunity to perform at The White House for President Bush during the Black Music Month Celebration.

In 2009, another life changing decision was made.  Nate decided to move to Los Angeles.  This has proven to be one of the best moves he’s made.  Since his move, he’s had the opportunity to play for Chuck Loeb, Avant, Taio Cruz, Dave Koz, and a host of other artists.  He’s appeared on Ellen (NBC), The Monique Show (BET), and Lopez Tonight (TBS).  More extensive traveling came along with the move.  This allowed Nate to perform in South Africa and several times in Indonesia.

During his 9 year professional career, Nate’s had the opportunity to perform and record with a Who’s Who of Gospel and Secular artists. These artists include…