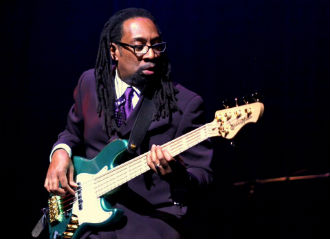 Nate Phillips ( Nathaniel Phillips) has been a renowned and recognized bassist for about as long as he’s been playing the instrument. He started playing professionally at the age of 13. A few years later he co-founded the highly acclaimed group called ‘Pleasure’ as one of the writers and producers for the group.

Nate managed to set a pace for bass players around the world and to this day they acknowledge his bass lines as the standard for learning the instrument. If a bassist could not play “Glide” then they were not a bassist. You Tube confirms this with the hundreds of players that honor him by displaying their interpretation of his classic works.

As the second to the youngest of 12 kids, Nate grew up in Portland, Oregon. His love for music began early in his life as he picked beans and berries every summer to buy school clothes. His AM transistor radio was his outlet to the world of music, along with albums and 45’s that his older brother would buy.

His love for music translates with conviction and reflects his experience

throughout the hundreds of recording sessions, live performances, and as a producer and song writer for many acts including Pleasure, Shades Of Soul, The Dazz Band, George Clinton, Richard Elliot, Rick Braun, Tower Of Power and others, his skills have been acknowledged by many publishing companies including Disney.

Nate say’s he has found a “winner” here at Bass Mods. He also adds “The feel and sound of these basses enable me to play in a way that is expressive and up front".