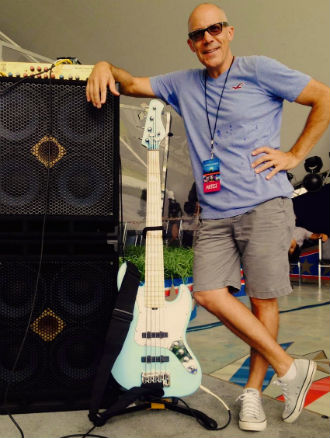 John Menzano picked up the bass as a matter of supply and demand. “My grandfather actually bought me a set of drums when I was 9 and I played those until I was 13. My brother’s garage band needed a bass player and my dad had a bass lying around the house, so I picked it up and started playing”. At 15 he received his first Fender bass. He would sit in the basement of his South Philadelphia row house and play along with records. He would attend concerts with his friends and dreamed of playing on a big stage.

He doesn’t remember his first paid gig, but it was around age 17. By 19, he was playing 6 nights a week in the Atlantic City Casinos. Still not a big stage, but it was a step in the right direction. A friend of John’s was going to California to attend Musician’s Institute (MI), so John sent away for a brochure. “Since I taught myself what I knew, I thought it would be good for me to get more education and really learn my instrument. The caliber of teachers at MI was so impressive. I moved to Hollywood in 1985 and graduated in 1986”. His first “real” gig was playing with Mary Wells. John kept in touch with many of the faculty at MI and went back to teach several summer sessions.

The 80’s and early 90’s were filled with television appearances, touring on the road, and hibernating in the studio. John was a regular member of John Stamos’ band on ABC’s comedy “Full House”. He toured with Sheena Easton, Three Dog Night, and Joshua Kadison. All the while he honed his craft. In 1994, he got a call from an old friend telling him that legendary guitarist Peter White was looking for a bass player. “Playing with Peter White really opened so many doors for me. He is not selfish with his band and has encouraged me to play with others. In fact, he has recommended me to other musicians. Through Peter, I met and toured with Rick Braun, Kirk Whalum, James Ingram, Marc Antoine, Dave Koz, Brian Culbertson, and so many more. I am grateful for all of the opportunities I have been given”.

The next step for John was to put together a CD of his own songs. “It has always been a goal of mine. On the road, people would ask me when I was releasing my CD. I thought, Why Not? I believe the maturity I have reached with my playing has given me the confidence to do this. I am really excited too. This is definitely a collaborative effort as I am calling on all of my friends to give their input and play on the tracks. Everyone has been so supportive of this endeavor”. John is currently the Musical Director for Donny Osmond.On a personal note, John lives in Valencia, CA with his wife, Alecia and their son Nick and daughter Mia. “I feel blessed and I thank God everyday for the gifts He has given me--music, my wife, my son—life doesn’t get better than this”.

John is currently the Musical Director for Donny Osmond.