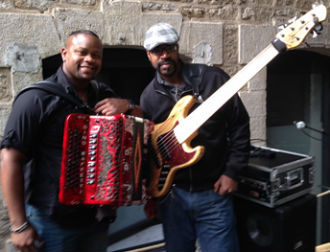 Born in Lafayette, Louisiana, Dion Pierre began his musical career as a saxophone player studying at Northwestern University and University of Louisiana at Lafayette. After hearing Ron Carter’s album “Piccolo,” Dion began his foray into studying bass. Playing bass started as a side interest and something done by ear, then evolved into something more deliberate with instruction by Robert Nash and then Bob Sunda.

Performing bass began with Captain Bill and the Funkatrons, then with the Fusebox (a funky fusion group), Modern Jazz Movement and his own jazz quartet. Dion then moved to playing zydeco with Corey Ledet and His Zydeco Band including playing on the Grammy-nominated album, “Don’t Shut Me Out.”

Dion currently plays with Dwayne Dopsie and The Zydeco Hellraisers. They have opened for Dirty Dozen Brass Band, Blues Traveller, Blind Boys of Alabama and Trombone Shorty and frequently tour through the United States, Europe and South America. They have also been frequently featured at many jazz and blues festivals such as the New Orleans Jazz and Heritage Festival, Rochester Jazz Festival, and Nancy Jazz Festival. He also still fulfills his jazz passion with his own jazz band.