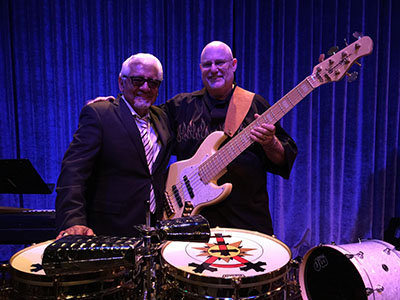 David Belove has been a mainstay bassist in the jazz and Latin music communities in the San Francisco Bay area for over 30 years. Originally from Kansas City, Missouri, he cut his teeth first playing in local r&b (soul) bands followed years later playing jazz on the acoustic bass with pianist Paul Smith and the young guitarist Pat Metheny.

A year in Miami and Ft Lauderdale, Florida brought more gigs with Metheny and a stint as bassist with the Peter Graves Orchestra at the Bachelors III nightclub (owned by the famous NFL quarterback Joe Namath) and the Marco Polo Hotel backing a diversity of artists such as Charro, Patty Page, Joel Grey, Bobby Rydell, Della Reese, Gladys Knight, and The Four Tops.

It was in San Francisco in the 70's that his love of Cuban and Brazilian music began. Many, many salsa bands and Latin jazz gigs later brings us to today where Afro Cuban music (and Gospel) continue to be his focus.

He currently performs with Pete and Juan Escovedo, Ray Obiedo, and the Wayne Wallace Latin jazz quintet, nominated for three consecutive Grammys in the Latin Jazz category including 2016. In addition, he teaches Afro-Cuban ensembles for both the community school and the bachelor's degree program at the California Jazz Conservatory in Berkeley, California.  David is a writer, contributing the chapter on the Cuban clave to Oscar Stagnero's 'Latin Bass Book' by Sher Publishing.

Rounding out his playing is his long association with the Oakland Interfaith Gospel Choir under the direction of Terrance Kelly, with whom he has played the bass for over 25 years. In the summer of 2015 OIGC completed a tour of Scandinavia playing at the Montreux Jazz Festival in Switzerland, the Molde jazz festival in Norway, and in Copenhagen, Denmark. And, of course, he plays in church in Oakland.

Playing his Bass Mods bass has become special for David. Over the years he has owned and played many instruments including the Fender classics. "I love that my Bass Mods bass has a custom hand made look and feel with a killer tone yet at an 'off the rack' reasonable price. It's easy to understand why players are now discovering this instrument...you should too".