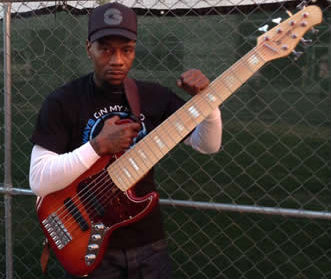 Unbelievable bass guitarist and singer Danyel Morgan is moving to the next level. Danyel is a self-taught bass guitarist and vocalist from Columbus, Ohio. As a child, Danyel was influenced by his father and began playing the bass with family members and gospel groups at the age of five. The first song he ever played was "Love & Happiness" by Al Green. Danyel also remembers his youthful days listening to his idol Stanley Clarke.

Around 2000, Danyel left Ohio to play and sing along with Warner recording artist Robert Randolph and the Family Band. The band has released two successful albums, which Danyel has either written or co-written and performed vocals on most of the songs including the 2003 Grammy Award-winning song entitled "Blind Boy of Alabama" and the two-time 2004 Grammy nominated song "Squeeze," which is the source music for a video game. The Family Band's Unclassified album won a 2004 Dove Award, and they performed at the 2004 Grammy Awards.

Danyel along with the band has toured the United States and Europe with Dave Matthews, Carlos Santana, Eric Clapton, The Neptunes, The Roots, John Mayer and many others. He has been featured on VH1, Conan O'Brien, The Tonight Show, Austin City Limits, The Grammys, MTV and many others.

Danyel has proven to be the showstopper and takes the audience to another level. He was even recruited by Eric Clapton and Carlos Santana to perform as a part of their stage show. Now with so much experience under his belt, Danyel is working on his solo project, Danyel Morgan & the Monstaz, that he wants and hopes the world will enjoy.